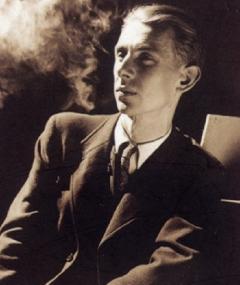 Julia’s lover, Dougie Birdsall, is loosely based on the great British documentary filmmaker Humphrey Jennings. Chances are you’ve seen clips from the footage he shot during the Second World War – they crop up regularly. Films like London Can Take It, Listen to Britain and Fires Were Started have earned him critical acclaim as ‘the only true poet the British cinema has produced’.

I first heard about Jennings soon after I left university – around the same time that I became intrigued by the Mass Observation accounts of the Blitz. That was many years ago.

Much later, when I was working on the first draft of If I Could Tell You, a friend offered to introduce me to someone who had worked with Jennings during the war.

‘So, you want to talk about Humphrey?’ he said, when I phoned him. And a little chill travelled down my back.

John Krish, who later became a renowned filmmaker in his own right, was 16 when he talked his way into a job at Denham Studios and found himself working as an assistant to Stuart McAllister, Jennings’ editor. He remembered them as an explosive pairing.

I went to interview him one wintry day. Over ninety and not in the best of health, he was generous with his time, energy and stories. And I was rapt. Here was a living link to a period that I had not lived through but could not shake off – here was the hand of the past, so present.